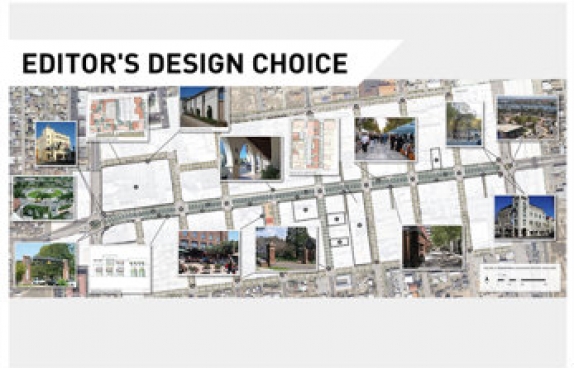 Build a Better Burb: The Online Journal of Suburban Design designates “The BLVD Transformation” as their Editor’s Design Choice.
Article by Amara Holstein
The city of Lancaster, CA, has taken a decrepit nine-block stretch of downtown and transformed it into a vibrant, walkable destination, making it a superb example of a community reinventing itself. “There’s a stereotype that small towns don’t have the wherewithal to carry a project like this off,” says Elizabeth Moule, principal of Moule and Polyzoides, the architecture and planning firm involved in the revitalization. “But they did carry it off. The city had a strong idea of a successful vision, and they single-mindedly made it happen.”
Originally founded as a railroad stop, Lancaster over the years went from being a bustling Western town to becoming a de facto suburb of sprawling Los Angeles, only 70 miles away. Unemployment hovered at 18% for Lancaster’s 157,000 residents, and as big box stores and malls replaced downtown shops, the main street withered. “Downtown was empty,” says Moule. “There were no cars, except ones passing through at high speeds, stores were closed, and there were high winds. Just tweaking it wouldn’t have been enough; the transformation had to be compelling to bring people back.”
Over the past 20 years, city officials and locals started efforts to recreate the area, installing a light rail station, affordable housing, and a performing arts center. Yet it wasn’t enough. Realizing the extent of the problem, Lancaster adopted the Downtown Lancaster Specific Plan in 2008. The plan included form-based codes­—regulations meant to encourage mixed-use neighborhoods that welcome pedestrians. Moule and Polyzoides were then hired to build on the city’s ideas.
“We didn’t just want to make a historical replica of what was there before—a classic Western town, with horses and saloons and Victorian buildings. Remaking that would seem like Disneyland,” says Moule of their design approach. “Instead, we took the original bones—a robust commercial corridor with lots of people and methods of transportation—and examined what the town is today, so that Lancaster could find its own groove.”
Inspired by the culture of the area and the high-desert setting, the architects created a rambla, a pedestrian strip down the middle of the road around which almost all parking is clustered. Rows of palm trees provide a wind screen and shade without concealing storefronts. Everything is designed to encourage walking, from the 21 crosswalks to landscaped crosswalk plazas with benches and pavers. Arcades hide less-attractive building facades, and sculptures and monuments are dotted around sidewalks.
The results have been nothing short of astonishing. Completed in 2010, the nine-block stretch now called the BLVD has completely rejuvenated downtown. People flood in for events, from farmers’ markets to holiday fests, or to go to 50 new shops, restaurants, and businesses that have since opened, along with a new park and museum. Cars don’t drive faster than 10 to 15 mph, and injury-related traffic collisions are down 85% in just two years. Economic returns have also been impressive for the $41-million project: downtown property values are up 9.5%, over 800 permanent jobs have been created, unemployment has dropped to 11.6%, and revenue from the downtown area is up 96%. Overall, the project has been estimated to have generated $273 million in economic output.
Can this kind of downtown project be replicated elsewhere? Moule thinks so, although she cautions that people must be sensitive to their particular area. “This project isn’t a template; people must look at their place, find the character, and reinterpret it in a different way,” she says. “But with a little work, with good streets, good stores, slowed traffic, comfortable pedestrians, letting businesses spill onto sidewalks—with those bones there, you can remake places.”